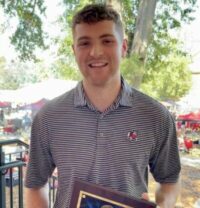 The Bridges Scholarship Award for Excellence in Leadership recognizes the leadership
achievements of a member of the Beta Delta Chapter of Delta Tau Delta Fraternity who by his superior abilities, his work and proven commitments to his Chapter, his Fraternity, his community, and his university has demonstrated the highest standards of excellence in leadership. The award comes with a $2,000.00 scholarship to assist the recipient with his academic pursuits.
The scholarship is only presented when a candidate is considered worthy. Mr. Scarborough is the first recipient in six years to receive the honor.
“Will has just been an incredible leader for our Georgia chapter,” said division vice president and advisor, Jody Danneman. “His vision for making the organization the absolute best that it can be along with Will’s commitment to strong, values-based decision making truly set him apart from his peers.”
“All I desired from my time as president was to give back to the place that has given so much to me and to leave my brotherhood in an even better place than when I arrived,” Scarborough said. “To receive this honor was special for me, because it meant I had been able to do just that.”