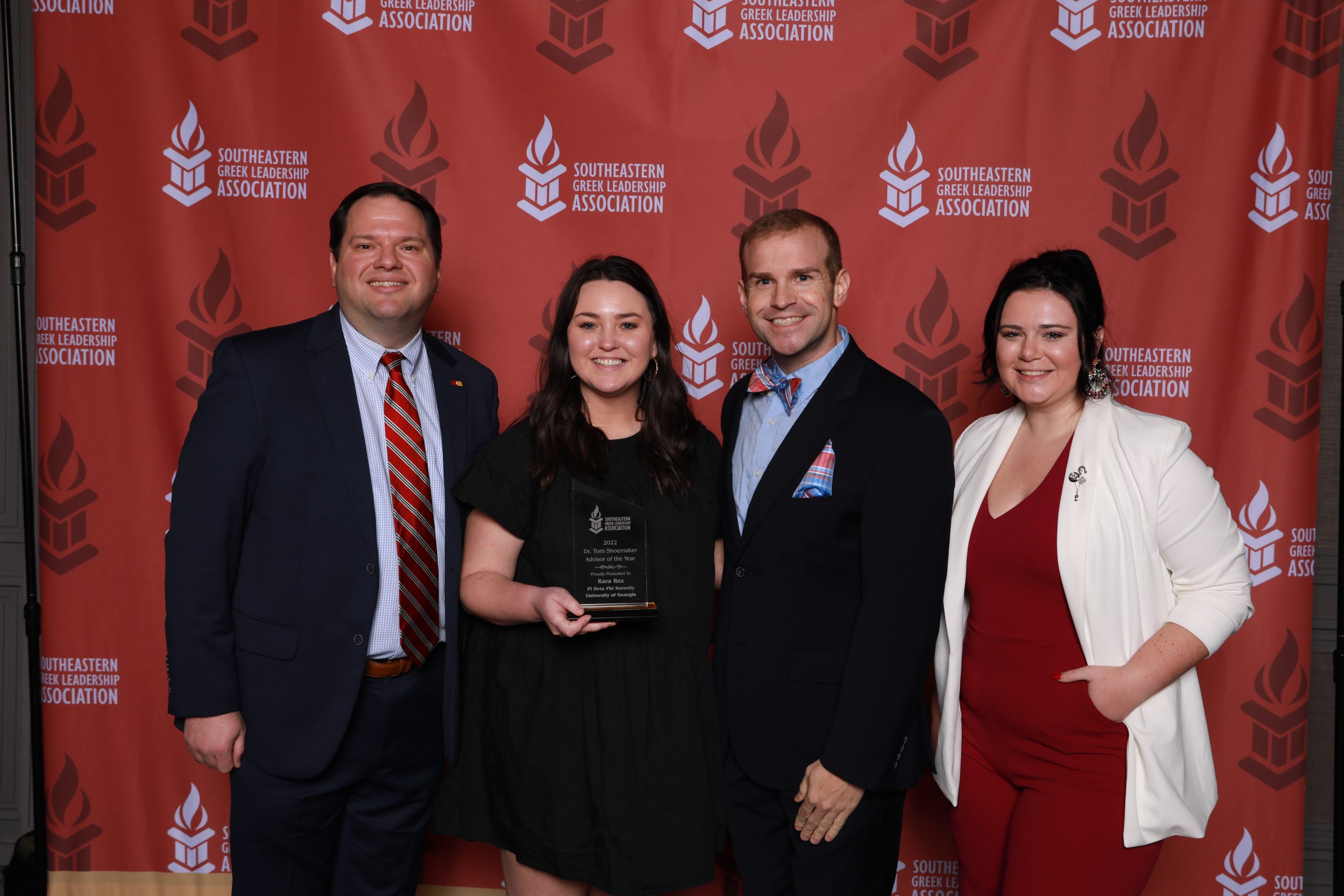 Each year at the Southeastern Greek Leadership Association Annual Conference, held in
Atlanta from February 10th-12th, fraternity and sorority communities, councils, and individuals are recognized for their outstanding accomplishments over the past year. These awards recognize excellence in leadership, philanthropy, community service, and academic
achievement among Greek communities. All four Greek Councils, represented by 26 students, and Greek Life staff attended this year’s conference and received the outstanding awards and recognitions below.

Description of Awards Won
Academic Enhancement: This award is given to the councils that excel in encouraging and
assisting high chapter and individual academic achievement and recognizes academic excellence as well as improvement in new members, current members, and chapters throughout the community.
Campus & Community Relations: This award recognizes the councils that best foster
understanding and support the sorority and fraternity movement through positive interactions with neighbors, faculty and administrators, law enforcement agencies, the media, etc.
Civic & Philanthropic Engagement: This award recognizes the councils that best provide
initiates and new members with the opportunity to enrich their own lives by giving back to the
campus or local community in a meaningful way and recognizes chapters that emphasize
hands-on community service and philanthropy.
Campus Impact Award: This award recognizes councils that submitted materials for the
following subcategories: Social & Cultural Awareness, Civic & Philanthropic Engagement, and
Campus & Community Relations. To receive this award a council must go above and beyond
within your community to make a difference in those subcategories.
Educational Programming: This award recognizes councils whose programs provide
education for both initiates and new members. Programs include the promotion of a healthy
mind and body, partnerships with other organizations, and other educational initiatives.
Social & Cultural Awareness: This award recognizes councils that exhibited the most
successful social concern effort during the past year. The recipient of this award will have
incorporated diversity, equity, and inclusion in its program and was selected based on the
overall impact on the community, implementation technique, and council participation.

Arham Shah, President of Pi Kappa Alpha and a 2022 IFC Clerk was interviewed and affirmed
to the SGLA Student Board of Directors during the business meeting Saturday morning. The
SGLA Student Advisory Board is composed of seven members of CPC, IFC, MGC, and NPHC
councils from campuses across the Southeast. These students serve as the undergraduate
voice on all aspects of planning the SGLA Annual Conference including keynote speakers,
educational blocks, and evening entertainment. The UGA Greek community is excited to have
one of our own represent this prestigious board.

A member of the IFC Executive Board said, “Arham exemplifies what it means to be a member of the Interfraternity System here at the University of Georgia. Not only has he served the Interfraternity Council through his continuous leadership as chapter president of Pi Kappa Alpha, but he has also assisted the Executive Board by serving as a clerk. The 107th Council cannot express enough gratitude and is extremely proud of Arham. We also congratulate him on being named a Student Board Member of SGLA.”

Chapman Shuman, the 2020-2021 President of Sigma Phi Epsilon, received the Gregory R.
Singleton Interfraternity Council Member of the Year Award. This award recognizes an
undergraduate IFC fraternity member in the Southeast who is a role model to their peers and
consistently illustrates what it means to live with integrity and by the values of their organization.

In Chap’s nomination letter it was clear that he truly embodies the cardinal principles of Sigma Phi Epsilon; virtue, diligence and brotherly love, and has consistently demonstrated what it means to be a fraternity man. Joshua Welch, Director of Greek Life, shared that he is
consistently impressed with Chap’s commitment to his responsibilities and ability to balance the things that were asked of him. When met with challenges as both a Chapter President and Clerk for the Interfraternity Council Chap sought out answers and facts to help inform his next step. During his presidency Chap was often required to think outside the box or reimagine signature events for the chapter based on COVID restrictions but never allowed constant change or uncertainty to sway his dedication to seeing the chapter move towards success.

Kara Rex, Assistant Director for Greek Life and Advisor to the Panhellenic Council, received the 2022 Dr. Tom Shoemaker Advisor of the Year Award. Criteria for the nominee include full-time service to the fraternity and sorority advising profession through campus impact, employment in fraternity advisement on campus in the SGLA region at the time of nomination. This award is intended to recognize student affairs professionals who have demonstrated exceptional professional standards and achievements in fraternity and sorority advising in the southeastern region during the past year.

Over the past two years, Kara has graced the Panhellenic Council, UGA Miracle, and the entire
UGA Greek Community with her dedication, spirit, and drive to make tomorrow better than
yesterday. Marion Kronauge, the current Panhellenic President, remarked this after learning of Kara’s achievement, “On behalf of the entire Panhellenic Council, we are so proud of Kara for winning the Advisor of the Year award. The amount of time she dedicates not only to the eight of us on the council but to the Panhellenic community as a whole showcases how deserving she is. Her passion and excitement towards us and the Greek Community is seen through her daily endeavors and inspires us to work harder and be better women. Congratulations, Kara, we are so proud!”